What type of refrigerant helps keep you cool? It’s probably labeled on your compressor – that big machine just outside your bedroom window – the one that makes all the noise!

Why is that important, you ask? Read more below. Here’s where to find the label. Hopefully yours reads “410A”. 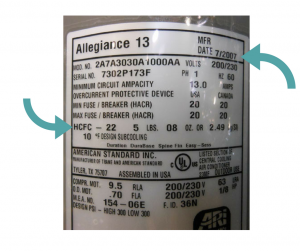 Heating and cooling contractors who have found virgin hydrochlorofluorocarbon (HCFC)-22 readily available at their local supply houses had best prepare for a drastic drop-off in R-22 refrigerant and such supplies very soon.

The U.S. Environmental Protection Agency (EPA) announced its final phasedown schedule regarding production and importation of HCFC-22 on Oct. 16. The order calls for an immediate drop from 51 million pounds allowed in 2014 to:

In its ruling, the EPA described the phasedown as an aggressive linear reduction. Other options would have allowed between 30 and 36 million pounds in 2015 — much higher than the 22 million pound limitation.

The smart play is to begin investing in training [on alternative refrigerants] and to not wait until the last minute to prepare your customers and your businesses for a time when R-22 is not readily available.

“EPA is trying to address the concerns about oversupply in existing inventories while encouraging transition, reclamation, and proper refrigerant management, all while sending a signal to the industry that allocations will be dropping,” said Charlie McCrudden, senior vice president of government affairs, ACCA, commenting on the supply options the EPA explored. “The agency considered market information, comments, regulatory and statutory requirements, and its long-standing policy objectives as it weighed the merits of the proposed approaches. The final allocation meets the 2020 phaseout deadline and should help achieve a smooth transition to more environmentally friendly alternatives while providing regulatory certainty to consumers and industry.”

Jon Melchi, director of government affairs, Heating, Air-conditioning, and Refrigeration Distributors International (HARDI), said: “This rule provides contractors with the knowledge that this transition is indeed happening. While there will certainly be some tightening of the market, there will be sufficient supply to meet servicing demands in the near future, and we urge all contractors to work with their distribution partners on the all-important question of, ‘where do we go from here?’ The smart play is to begin investing in training [on alternative refrigerants] and to not wait until the last minute to prepare your customers and your businesses for a time when R-22 is not readily available.”

The impact on virgin R-22 supplies will be almost immediate.

“The agency settled on a much more aggressive schedule — a 57 percent reduction from the 2014 allocation,” said Gordon McKinney, vice president, ICOR Intl. Inc. “We encourage all of our associates to prepare for a dramatic increase in R-22 pricing and a major spike in alternative refrigerant sales and reclaim activity.”

Steve Mella, CEO, ComStar Intl. Inc., predicted immediate and future shortages and price increases. “These are normal results and will be expected by the industry at large. [But] as this moves forward, the market will dictate what fills the vacuum and the direction the industry takes. Once the word gets out to all levels of our industry, we should hear a sigh of relief. The five-year allocation plan will give the industry the ability to make financial decisions that will help the overall industry and economy.”

Maureen Beatty, vice president of operations, National Refrigerants Inc., said some suppliers may limit the quantity of R-22 they are offering, but that does not mean R-22 is unavailable. “Contractors should make sure they are buying from a reputable supplier who will assure the legitimacy and quality of the R-22 they sell,” she said.

Honeywell Intl. Inc. addressed immediate implications in an announcement: “One model suggests this ruling will result in existing channel inventory to be drawn down at an accelerated rate as end users attempt to build stock in anticipation of limited supply, while others hold inventory. The combined effect could be limited supply near-term. Contractors should prepare accordingly.”

Honeywell’s statement also referenced an existing base of hydrofluorocarbon (HFC) refrigerants that can be retrofitted into existing R-22 systems, a process that has been successful for a number of years, adding, “these are proven alternatives to R-22 for every application. Contractors should take steps to educate themselves and their customers on the alternatives.”

The use of reclamation services has long been available and brings used refrigerants back to ARI-700 purity standards. Such a service will allow any R-22 currently in use or yet to be produced to be recycled and reused well beyond the 2020 end of virgin and imported versions of the refrigerant.

Many refrigerant reclaimers applauded the announcement.

Bill Auriemma, president and CEO of Diversified CPC Intl., said: “As an EPA-certified reclaimer, we welcome the ruling and appreciate the fact that the EPA collected and considered industry feedback. The ruling brings much-needed clarity to the market and enables manufacturers, reclaimers, and HVACR contractors to move forward with decisive plans, which will only benefit the refrigerant industry as a whole.”

Kevin Zugibe, chairman and CEO, Hudson Technologies, said, “As we approach 2020, when virgin R-22 production will be fully eliminated, the reclamation industry will become the primary provider of R-22 to service aftermarket demand.”

Contractors need to keep customers informed of these developments and the impact they may have on a contractor’s ability to service R-22 equipment.

“We feel the most important thing is for contractors to make sure they keep their customers well informed,” said Butch Welsch, owner, Welsch Heating and Cooling Co., St. Louis. “This spring, during maintenance visits and in our newsletter, we will be advising customers of the situation. We’ll urge them that a replacement, rather than a repair, is probably the best thing to do.”

The dry-ship issue goes back to 2010 when the EPA said no new equipment could contain the refrigerant. However, the industry determined condensing units designed for R-22 could continue to be shipped dry, without refrigerant, as part of aftermarket servicing.

“The EPA didn’t receive substantive comments to these questions, but intends to survey a limited number of industry stakeholders to collect additional data,” he said.

Another simmering issue surrounding this announcement is the placement of HFC refrigerants under the same no-venting rules that govern chlorofluorocarbons (CFCs) and HCFCs.

Regarding this, McCrudden said: “In the final rule, the EPA mentions a pending petition submitted by an industry trade group to extend the Section 608 program rules to HFC refrigerants. In its response to comments filed on this, the (EPA) final rule noted, ‘The EPA is actively considering the merits and environmental benefits of this petition under a separate process.’ ”

At the same time, from a global perspective, the U.S. has publicly noted its desire to steer away from HFCs perceived to have a high GWP.

In this context, the EPA has been proposing to decertify HFCs -134a, -404A, and -507 in certain new and retrofit retail food applications under its Significant New Alternatives Program (SNAP).

The proposal deems certain HFC refrigerants unacceptable in specific applications on or after Jan. 1, 2016. There has not been a final rule in that regard, but the EPA now is proposing to expand the list of acceptable low-GWP alternative refrigerants.

According to a statement from representatives at Air-Conditioning, Heating, and Refrigeration Institute (AHRI), the EPA, on Oct. 10, issued a pre-publication notice in which “the EPA found several alternatives acceptable in air conditioning, refrigeration, and foam-blowing end uses.” Included was the use of R-744 (CO2) in new refrigerated transport equipment.

Reprint from an article published in 2014 here.